A short film I made a couple of years ago. It wasn’t the best of quality, but I did try my best on it. The premises of the short, is a satire of the black male experience in the United States. 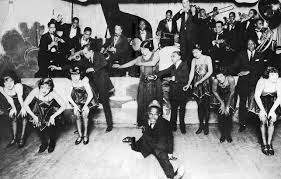 Black America has become white America source of entertainment. At glancing a list of the richest African Americans, I noticed an alarming trend, here is a link to the list so you can see for yourself, “http://www.ranker.com/list/the-20-richest-african-americans/worlds-richest-people-lists”

Have you figured it out? Basically with the exception of a few nearly everyone on the list are entertainers of some sort. Whether it be sport, music or film.

Now look at a list of the richest Americans in general, “http://www.forbes.com/forbes-400/top20/#3df0ffc3d8d5”, not one person is an entertainer, the list is made primarily of tech entrepreneurs, energy tycoons, and media moguls.

Black people have been “chucking and jiving” for white America since the minstrels of the 19th century. The only difference today is the market reach and the profitability. Many African Americans take great pride that black people have an influence on pop culture, but at what cost. Have black people become so ghettoized in how they aspire to be successful in this country.

Go to any urban school in this country and ask the typical black child what would he or she aspire to be, and the most popular answer is either a sports athlete or a rapper. You will be hard pressed to hear child aspire to be a tech entrepreneur or business mogul. Why do young black people have such a limited scope of career choices? The answer lies on what black youth see in the media. Media is very important in how people view themselves. Films, music, television, etc. informs us on how to think, how to behave, and how to view life. When you’re black you are particularly sensitive to media influence. This because as a minority you have limited exposure to representation that you can relate to, and when you do get that representation, it hold a lot sway on your thought process.

The worst of this is that black Americans don’t even fully profit from their talents, behind every multimillionaire black entertainer there is a much richer white person in the background profiting handsomely of black ingenuity. Yes, Michael Jordan became a billionaire from his signature sneaker, but Nike in return became a multi-billion dollar sportswear company with a near monopolistic hold in their industry. Yeah, rappers make millions of dollars from tours and single sales, but record companies make billions of dollars every year in licensing royalties.

Black America epitomizes cool in this country, and corporations gladly use us as marketing tools, finding an athlete to petals their sneakers, rappers to wear their clothing or appear in their soda commercials. I’m am not at all angry at anybody for profiting off their marketability, but I do just want to fully analyze the situation in terms of race in this country.

Us as black people need to do better for ourselves, we need to teach our children to have a diversity of aspiration. You have a lot better chance of becoming an oral surgeon or an electrical engineer than a rapper or an athlete. It vital for the future of Black America that our youth have realistic aspirations.