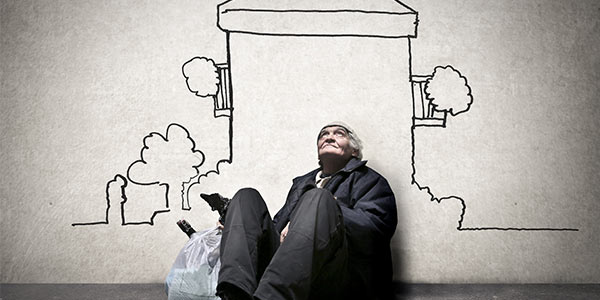 Living in New York City as the case of any major city throughout the world one of the many daily occurrences you encounter is that of homelessness. As I walk into the subway and sit down I expect some person claiming to be homeless and needing some help. I actually see the same person sometimes multiple times a week asking for money. I used to be pretty generous and give money to the homeless(especially if they had a visible handicap) but then one day I asked myself a question about why were there so many people who were homeless and what policy can be put into place to really address the problem.

First and foremost homelessness, particularly in NYC, gets over exaggerated. About less the one percent of New Yorkers are homeless. And to further break the number down most homeless people suffer from either substances abuse or mental illness which inhibits them from carrying out basic life necessities such holding a steady job or maintaining basic hygiene. If you want to alleviate homelessness more mental health hospitals and fewer shelters would prove much more effective. Now can we go around and put every homeless person who we suspect to be crazy and rush them to a mental institution no( at least not exactly) It would best be done through a system where a homeless person breaks a law such as public urination or vagrancy and having a psychiatrist do an evaluation to see if that person is susceptible to go into society and of course getting the person to consent to be institutionalized (unless the person is deemed a danger to himself or others and such consent wouldn’t be needed).

And second, the idea that I am going to give every homeless person who asks me for money throughout my day my hard earn cash to encourage them further to beg doesn’t help anybody. It came to me one day that many homeless people actually are already receiving government assistance through disability and SSI checks that they beg because they know they can get over on people. A typical New York City subway train contains ten cars. So if you were homeless and ambitious enough to beg for money on every subway car and get at least two people to give you a dollar you can earn twenty dollars per train. You hit five trains in a day you can make up to a hundred dollars a day just begging for money(untaxed mind you). So homelessness for some can be pretty lucrative.

If you don’t buy my point look at how the Japanese deal with their homeless issues. Which can best be explained by watching this video https://www.youtube.com/watch?v=eK–oCVP18A. I myself had gotten a chance to visit Tokyo a few years back and was struck by how different homelessness was over there than it is here. First, no homeless person can ever be seen begging, Second I didn’t encounter any homeless person that reeked of foul odor as is the case In NYC(whole subway carts will be emptied just because passengers can’t take the smell of some the homeless person in it.). Third most homeless people live in these makeshift communities in the Tokyo subway systems.

I do believe that we should help people who are down on their luck for their sake and ours but I just think we’re going the wrong way about it. And that by having an honest and more open dialogue we’ll really help these down trodden individuals.

From May 23, 2017, until June 4, 2017, I was in Paris France. It was my second time ever outside the United States( The only other country I’ve been to was Japan) and my first time in France. I didn’t really have any expectation before I came to France. I decided to come to Paris as a vacation. The reason I choose Paris is that for the past year I’ve been teaching myself French. So I thought to myself France would probably be the best place to get some practice in. So here goes my review of the entire trip(from of course my own personal opinion)

Paris I found to be pretty boring and really expensive to the sum of my experience there. The entire city looks virtually the same with its cliche three to four story buildings. I found myself sometimes in new parts of the city wondering to myself “if I’ve been here before”. You can walk the city for hours yet see the same old canals and cobbled streets. Now I’m from New York City and I’m used to experiencing total different scenery after a couple hours of walking. In New York, neighborhoods can look totally different from each other and have a totally different vibe altogether. This is not true of Paris where the entire city can be pretty uniform in both scenery and vibe.

Now the second strife I had with paris is how extremely expensive it was(particularly the food). In Paris, there is a lot of bistros and one can commonly observers Parisians eating outside many of these bistros. I myself ate at some of these places and yes the food is good, but I soon found out bistros where the only places one could find good quality food (of course the exception is if you cook your own dinner). In New York if I was hungry and wanted to eat out on a budget I have a plethora of options, maybe I can go to the local deli and order a hero for four dollars or maybe go to a Chinese takeout and order meal for less than six dollars. This is not true of Paris where you will be hard pressed to find any fast food joints. I’ve seen about two McDonald(which were not as good as the McDonald’s in America in my opinion) there are no food trucks in Paris. The only option I found myself taking if I wanted to eat for cheap was to visit a supermarket and buy some refrigerated sandwich(which let me tell you aren’t really that good and doesn’t certainly doesn’t fill you up).

There are a ton of scamming gypsies all over Paris, they congregate by the tourist attraction, usually asking tourist if they would like to sign some form and then asking them for some Euros. Here’s one example, my second day I went to visit The world famous Musee d’Orsay(It contain the famous Van Gogh self-portrait) I was across the street from the museum when a woman who I thought was deaf(as she played the role) came up to me with some forms with a pledge to donate to some bogus institution for the deaf. I smiled and signed to her that I wasn’t interested in making any pledges. As I crossed the street I see here going up to two females and immediately conversing with them. I must tell you I was a little upset at this revelation of deceit. She had me perfectly fool that she was deaf and had me feeling a slight remorseful for her. I witness more gypsy scamming besides this such as an old gypsy woman asking children at a McDonald’s for food, the children proceeded to give her food, she smiled and took the food. I walked outside ten minutes later to find this woman with a bag full of bread( I guess that wasn’t enough to satiate her treacherous hunger). I also notice that virtually all the homeless in Paris are in fact gypsies and they can be seen sitting on cardboard(sometimes entire families including children) and begging for money.

Overall I believe Paris is overtly hyped up as this great and magnificent city. But hey I guess it all depends on what you’re looking for. Me.. myself I am more of a big city cosmopolitan kind of guy. I like to walk around a large city and be in awe like I am in New York and I was in Tokyo.