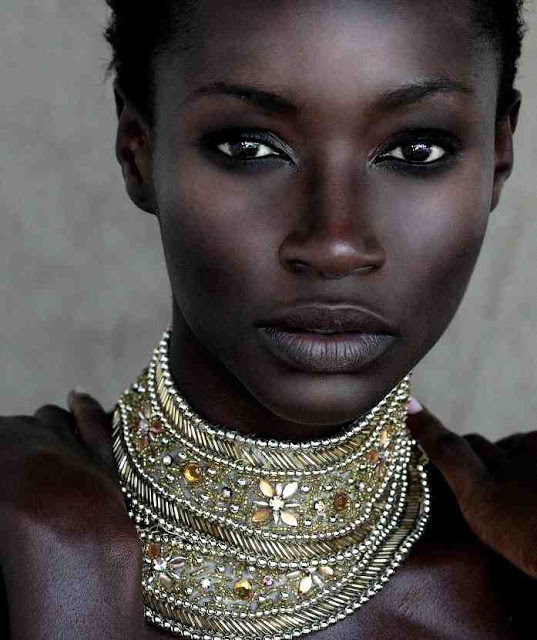 What is it about black features that supposedly makes it so unattractive to some. Is it the lush lips, High melanin skin complexion, or just the coarse and strong hair. In my personal opinion, there is absolutely nothing wrong with the physical features of the African, which I shall demonstrate

First and foremost we need to understand why do different groups humans look so varyingly different from each other. Before I get into this, I also want it to be known that humans share about 99.99% of our genetic code with each other regardless of “race”. Humanity as a species(anatomically modern) first originated 200,000 years ago somewhere in east Africa. Then around 50 thousand years ago bands of humans left Africa for Europe and Asia(Human reaching the Americas 15,00 years ago). That being said the first humans had to survive in very hot and arid condition of Africa. The sun provides humans with vitamin D, through ultraviolet radiation. Too much UVR and a person can develop skin cancer, a good protection from this is to have a lot of melanin, which translates into darker skin, to protect Humans from skin damage. To project the tops of our heads, coarse and tightly bound hair was needed. To better expatriate sweat, broad facial features with larger surfaces tend to do a better a job.

So why are African features so unattractive if it was so evolutionary advantages. First it has to do with the legacy of slavery. When one group of physically different humans, subject another group of humans, those attributes that belong to the subjected are deemed inferior, just as their status in that respected society.

Black people in the United States as well as across Latin America. Embody a sense of inferiority in their appearance. This is why black women in America spend billions of dollars every year on hair straightening product as well as hair extensions(colloquially called weaves). The fact that women who are lighter in skin complexion and possess European physical features are considered more attractive by many black men. And why many black people will ridicule each other for possessing features that deemed to African, such darker skin(being called crispy, darker),thicker lips(bottom lip jocks), or coarser hair(nappy hair, bad hair as opposed to good hair which would be European).

There is a societal delusion in the inferiority appearance of Africans. One common derogatory remark is the comparison of black people to monkeys. I will show how this dis-remark can be reversed on Europeans

There is no reason why black people or any other racial group should be demonized by their appearance. At the end of the day, we are all humans and beauty can be found in every skin hue, hair grad, eye shape, and body size!